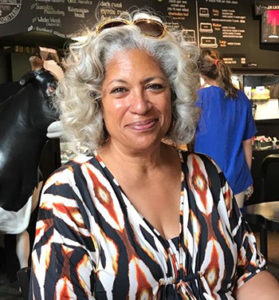 Candelaria Silva-Collins is a consultant, writer and trainer/facilitator who lives in Boston, Massachusetts. Her areas of expertise include cultural economic development, community outreach and engagement, and facilitation and training.

Candelaria was the first director of ACT (Arts, Culture & Trade) Roxbury from its inception in 1998 until August 2007.  ACT Roxbury was the cultural economic development program of Madison Park Development Corporation.  She conceived and developed:

She played a major role in the creation of the Roxbury Center for Arts at Hibernian Hall, the rehabilitation of the grand former Irish Dance Hall.  ACT Roxbury received an Out of the Blue Grant from The Boston Foundation in 2005.

Candelaria has published three booklets:  Handling Rejection; Pushing through Shyness: Networking Tips; and Real Questions about Sex & Relationships for Teens: A Discussion Guide for Parents.  Her essays, short stories, children’s stories, and poetry published in such publications as Boston Globe, Glue magazine, New Words Journal, Sojourner, Roxbury Literary Annual, the Hornbook, the Dictopedia, the, Ebony, Jr., and the School/Library Journal.  An active blogger, Candelaria was a Contributing Editor to BlogHer.com. She also writes about relationships, family, current issues, race and sex on her blog – candelariasilva.com

She is also on the boards of Dunamis, Boston and Write-on-the-Dot.

She was a member of the Lead Boston Class of 2006 sponsored by the Boston Center for Community & Justice. She was a volunteer for Generations, Inc., with the Boston Public Schools and has provided mentorship to teens, college students and young professionals throughout her career.

2006 – The Drylongso Award from Community Change

2003 – Top of the Arts Award for Individual Leadership from the Arts and Business Council of Greater Boston.