Neither slavery nor involuntary servitude, except as a punishment for crime whereof the party shall have been duly convicted, shall exist within the United States, or any place subject to their jurisdiction. 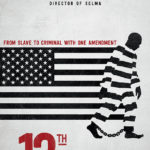 Director Ava DuVernay’s eloquent, important and searing documentary about the lineage of the oppression of Black men (especially) in the United States, is streaming on Netflix now.  You much watch it and shout loudly from the technological rafters at your disposal as well as in your personal encounters with others that they watch it soon…NOW.

With powerful images and potently precise commentary from leading scholars, historians,  and activists (some of whom were incarcerated themselves) The 13th examines mass incarceration in the United States and how it evolved from the “end” of slavery immediately after the end of the Civil War to the prison-industrial complex that incarcerates hundreds of thousands of Black and Brown men today.

Despite notable victories throughout history by Freedom Fighters and activists from other tribes, the parallel story has been one of intentional, state-planned-and-sanctioned incarceration of Black men to suppress the Black community, thwart Black self-determination and, in the process, to destroy Black families.

This incarceration was done for petty, often trumped-up reasons – mainly a need for free/low-cost labor – as well as to destroy any independent political thought and action in the US (the surveillance by and killing of virtually all Black leaders by representatives of the government agencies like the FBI).  As a people we have been stunted in our growth and development.

Between the casualties of the Vietnam War, the War on Drugs, and the mass incarceration of and murders of thousands of men, our community was stripped of many healthy, loving men, which is why so many of the heterosexual Black women I know have not had a significant loving relationship in their lives for decades, some ever.  We can’t even begin to fathom how much we have lost because of all who were taken away by this assault.

I don’t drink or smoke weed but I sure wanted to imbibe something after watching The 13th.  I could not have gone to a public viewing of this film. I could only watch it in the safety of my home with my husband.  He and I were able to share our feelings and decompress.

I’ve been reading Black history regularly since I was a sophomore in high school and I read The New Jim Crow by Michelle Alexander cover-to-cover (she is one of the fabulous historians whose comments are included in this documentary).  I’ve also lived through the War on Drugs (read War on Black people),  welfare reform and other policies of Presidents Nixon, Reagan, and Clinton.  None of that took away the potency of this incredible film.  I highly recommend it as a primer on Black devastation and Black liberation.

Ava DuVernay is a wizard and an incredibly wise, respectful and loving  filmmaker.  That respect and love under-girds this documentary and makes it even more potent than it would have been in other hands.

We must love each other, take care of each other, believe in each other, forgive each other, and elevate each other as Black people. This is important because as Malkia Cyril, founder and Executive Director of the Center for Media Justice who is featured  in the film says, a lot of Black people embraced the notion of the super-predator Black male and bought the hype, too.

We must never stop fighting an economic and law enforcement system built on the backs of Black, Brown and other people of color and poor people.

The Philosopher and her Camera – New Republic Article

The New Jim Crow: Mass Incarceration in the Age of Colorblindness by Michelle Alexander

There are so many important historians and activists featured in the film, 13th including Angela Davis, Shaka Senghor, Khalil Muhammad, Van Jones and Henry Louis Gates, Jr.  I cannot link to them all.  See the film!