Funeral Blues by W.H. Auden was made famous by the movie Four Weddings and a Funeral, when one of the key characters mourns the unexpected death of his partner.  It turns out, the poem was written in a different milieu, which I will share at the end of this post. 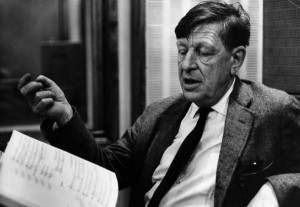 Stop all the clocks, cut off the telephone,
Prevent the dog from barking with a juicy bone,
Silence the pianos and with muffled drum
Bring out the coffin, let the mourners come.
Let aeroplanes circle moaning overhead
Scribbling on the sky the message ‘He is Dead’.
Put crepe bows round the white necks of the public doves,
Let the traffic policemen wear black cotton gloves.

He was my North, my South, my East and West,
My working week and my Sunday rest,
My noon, my midnight, my talk, my song;
I thought that love would last forever: I was wrong.

The stars are not wanted now; put out every one,
Pack up the moon and dismantle the sun,
Pour away the ocean and sweep up the wood;
For nothing now can ever come to any good.

Such heartbreak.  Such grief.

Auden first wrote it in 1936 as part of The Ascent of F6, a play that he co-wrote with Christopher Isherwood. In the play, Funeral Blues was satirical.  Read more at shmoop.com

Words are powerful.  The writer has one intent when s/he writes the words and then sends them into the world where they belong to each reader who brings their own meaning to the original words.  Then, if the words are lucky, they are defined again when spoken into the world, whether in class, a play, a lecture or a movie.