Skip to content
Home » Books » Inventology: how we dream up things that change the world 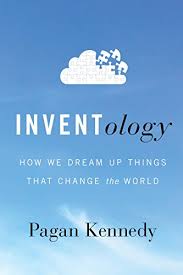 The stories of inventions and inventors – magnificent and simple – are featured in Inventology: How we dream up things that change the word by Pagan Kennedy. I highly recommend this book.

I was hipped to  Inventology at one of the regular author conversations Joyce Linehan hosts at Ashmonticello in Dorchester.  I probably wouldn’t have known about Inventology if I hadn’t attended.

Kennedy covers a lot of ground I this book, including sharing a great definition of invention in the intro: “Invention , according to Fry (Art Fry, inventor of the Post-It Note), is what happens when you translate a thought into a thing.”  She also distinguishes between invention and innovation.

Inventology is divided into Five Parts:

I was turned on by the back-stories of inventions –  some made for profit, some made to solve a problem an individual had observed, some inspired by science fiction, and some the result of a  happy accident or an inspired moment.  Many inventions in today’s internet-connected world are shared openly, innovated by many people, crowdfunded, and made available to the masses.

I almost underlined the whole book (I write in books I own) because there were so many interesting stories and observations.  Here are a few:

“There seems to be some kind of threshold – some number of hours – after which frustration produces creative insight.” (5)

“The two men made the digital design plans for the Robothand free to all, so that anyone in the world with access to a 3-D printer could manufacture it for under $30.” (19)

“…one of the most important parts of the inventing process involves an unusual ability to visualize an imaginary world – to “prototype” an idea by constructing it in the mind’s eye.” (61)”

Very often, the ideas of fiction writers are directly used during the early development stage of a new field of science and technology….Science fiction “helps overcome psychological barriers on the road to ‘crazy’ ideas.” (142)

“Outsiders, rather than those within a field, tended to hit on the best answers.” (160)

“The walls between disciplines and industries keep problems hidden away from the people who possess the oddball knowledge necessary to solve them: (161)

“Lakhani decided to dig into the data to find out whether women were more likely than men to win InnoCentive challenges.” (`162)

To find the answer to this you’ll have to read the book.

Another gem in Inventology was learning about the torture inveterate inventor and optimist Genrich Altshuller endured under Stalin’s regime and the incredible creativity he used to withstand the torture.  Altshuller believed that people could be trained to have creative minds and traveled teaching others how to do so and has disciples and progeny around the world.

One of the take-aways is not to discount an idea, no matter how small and that, as always when significant things are achieved,  determination and consistent effort matter most. Inventology reinforces the importance of children having time/space/tools to tinker and make things outside of traditional classrooms to allow them to develop problem-solving and creativity.  They will become the technical explorers that will solve many of the world’s problems if we unharness their enthusiasm and fresh eyes.

6 thoughts on “Inventology: how we dream up things that change the world”