Lo and behold that some famous poems by well-heralded poets that I had to read for school, still speak to me. I didn’t understand the truth of the Road Not Taken when I first encountered it. Now, as someone who has gained some knowledge and experience from my years on earth, I would say that whatever road one takes, there are joys and sorrows. One hopes and strives to have more joy than sorry. Here are two poems by Robert Frost – The Road Not Taken and The Impulse. 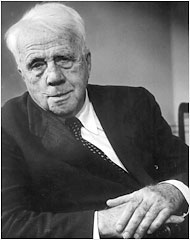 The Road Not Taken by Robert Frost

Two roads diverged in a yellow wood,
And sorry I could not travel both
And be one traveler, long I stood
And looked down one as far as I could
To where it bent in the undergrowth;

Then took the other, as jut as fair,
And having perhaps the better claim,
Because it was grassy and waned wear;
Though as for that the passing there
Had worn them really about the same,

And both that morning equally lay
In leaves no step had trodden black.
Oh, I kept the first for another day!
Yet knowing how way leads on to way,
I doubted if I should ever come back.

I shall be telling this with a sigh
Somewhere ages and ages hence:
Two roads diverged in a wood, and I—
I took the one less traveled by,
And that has made all the difference.

The Impulse
It was too lonely for her there,
And too wild.
And since there were but two of them,
And no child,

And work was little in the house,
She was free,
And followed where he furrowed field,
Or felled tree.

She rested on a log and tossed
The fresh chips,
With a song only to herself
On her lips.

And once she went to break a bough
Of black alder.
She strayed so far she scarcely heard
When he called her—

And didn’t answer—didn’t speak—
Or return.
She stood, and then she ran and hid
In the fern.

He never found her, though he looked
Everywhere,
And he asked at her mother’s house
Was she there.

Sudden and swift and light as that
The ties gave,
And he learned of finalities
Besides the grave.

<><><>
These poems were published in The Road Not Taken and Other Poems (unabridged) by Robert Frost.