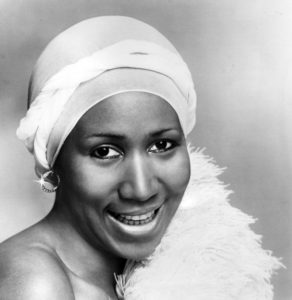 4) Her “Mississippianness” —  Of course I claim everybody as being from Mississippi or descended from Mississippi. I say what Africa is to world civilization and the Diaspora, Mississippi is to American culture and civilization. I consider Aretha an apotheosis of the Mississippi Diaspora. She is so Mississippian, so Delta. One could see this, for example, in her iconic hat at President Obama’s inauguration when she sang, “My Country Tis  of Thee”  and so on.  Her hat caused a sensation, but we black people recognized it as our women’s elegance and creativity seen every Sunday, whether custom made from a favorite millinery that Aretha frequented or upcycled from a thrift store.