It  is not unknown to me. I actually do know it.  I’ve been to that place, I’ve seen that sculpture, and I’ve experienced that event/practice/celebration. I live or have lived in that neighborhood or on that street.  I’ve read that book.  I learned that history.  I’ve dined at that restaurant, gone to that joint – been there more than once as a matter of fact. 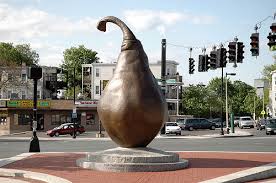 “Do the ppl who write these headlines ever consider that some listeners/readers ALSO live in places that you prob haven’t heard of?”  He was writing in response to the headline: (the Curiosity Desk) has the story about a Boston statue that you probably haven’t heard of.  In this instance, the story was from WGBH News but it could have been the Boston Globe (“The story behind Dorchester’s Mysterious Pear”) or any number of news and information sources both local and national.

First of all, thousands of people drive by this 12-foot Bronze Pear statue every single day – many twice a day.  It is not unknown to those people.

When I see such assertive and definitive language, I always want to shout:

It’s not off the beaten path. Perhaps it’s out of your way but it’s on my way, in my path, and part of my life.

I know that headline writers like to write headlines that scream and make assertions to get people to read the story even if the headline contradicts the ultimate story but really, it’s kind of lazy and is sometimes offensive.

If a reporter hasn’t heard of something does that mean it doesn’t exist or is hidden?

We are not hiding but are living in plain view.

No one knows everything not even the wise for knowledge is endless that’s why it’s so prized or should be. (quote from Candelaria Silva)

* Referring to the 12-foot Bronze Pear in Dorchester – Clapp Favorite Pear by artist  Laura Baring-Gould. Not, in my opinion, the most attractive sculpture in the city, but certainly an appropriate historical reference.

2 thoughts on “Hiding in plain view”