(This post was begun before the eclipse today – a moment I shared with many other lovely people at the Boston Public Library and before the Boston Resist March on Saturday – another few hours of witnessing positive people pulling together.  Why am I telling you this?  Because re-reading this, I sound terribly cranky – which I’m not except when  I am  I still want to post so I shall.)

Who and what is valued is shown in numerous ways especially in the work environment. Actions speak as loudly and often more resoundingly than words.   Messages are sent and received.  Things that seem small or inconsequential at a moment in time often reveal themselves to have deeper meaning especially as they are repeated or are linked with other messages.  It sometimes takes me a while to notice and put two-and-two together because, generally, I sort for the good.    Eventually, though, I get it.

Would you like some examples of what I am talking about?  Okay, here we go:

Just after I was hired, my supervisor told me that because my job was in the field,  there was no need for me to bother myself attending weekly meetings where the staff touched base.  I stated that I’d like to attend at least for the first few weeks so that I could get to know the organization and the team.  I’ve been attending ever since and contributed beyond my job description.  Had I heeded this initial advice, my work would not have been on the staff agenda, no one would have heard from me what I did, and I wouldn’t have been able to make regular contributions,.  Out-of-site, out-of-mind and soon you’ll be on your behind.  The thing is though, the initial rebuff has become clearer to me over time and reinforced in other ways that add up to say my program was not important.   This has happened in different yet similar ways at two jobs. 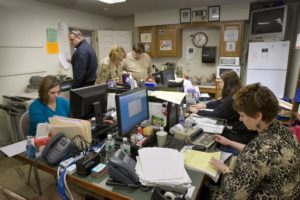 It also meant that I worked for four years before I was given an in-office space.   In my other long-running gig, space has never been made for me except for a small folder where I can receive mail. Staff and meeting space issue is endemic in this and other non-profit organizations.  Worker-bees have to share desks and jockey for  space to me.  You have to go outside or take a quick coffee run if you need to have a private conversation.

Do you value your workers? These non-profits would say yes, more than likely.  I would say, look at the work environment. Work  and living environments send a message about who is valued.  I notice this a lot as I travel through the city. On one side of Tremont Street there are gleaming buildings, landscaped and clean for college students. On the other side, there are overgrown lots and a low-income housing development (what used to be called “the projects”) which is not maintained and grimy.  These are for poor families. (There are plans to change this but it hasn’t changed yet and has been sit to fester far longer than it would have if the people who live there held value to anyone other than themselves.)

Several talented, educated and credentialed women I know make salaries between $17-25k per year in 2017!    They are barely scraping by in Boston.  Clearly this town doesn’t value them.  The non-profits they work at ought to be ashamed to even call what they make salaries.  Non-profits can raise money for gleaming new buildings but not, it seems, to increase salaries or improve working conditions.  These women did the right things, like get degrees and training, but have been left out of economic prosperity or comfort.  They don’t have mates either – not because they don’t want to – but because that’s the way it often is for Black women.

They have to fight not to absorb the messages that they get that they do not matter and that their talents, efforts, and contributions aren’t valued.

We send messages everyday – at work and at home – about whom and what is valued.  Some of us are on the organizational chart and some of us aren’t.  Some jobs are full-time with benefits and others aren’t or they become benefited temporarily because of grant funds and then shrink back to marginal status again.

The incredible turnover I’ve witnessed at several organizations doesn’t seem to cause rancor or even be noticed by the administrators because there is a steady stream of workers to feed the machine and so no individual truly has value; whatever unique contribution they bring is only fleeting.  A result is that often teams don’t coalesce;  teams are repeatedly back to square one in terms of knowledge, connection and fluidity  Damn near everyone is looking for an escape hatch.  So many of us are hustlers working multiple jobs with side businesses trying to to hold on because it is rare that we can entertain the notion of thriving.

I’m not naive.  I know that this is the life.  We live for a short time.  Our space in the universe is filled in quickly by someone else. when it’s our time to exit Perhaps I’m just overly-sensitive.  But I notice, notice, notice accommodations, actions, inertia, indifference, and the utter blandness of so many environments and encounters – all of which send messages to each of us every day.  Why is it this way?  It truly doesn’t have to be.

We could have workplaces and streets filled with beauty and art.  We could have meaningful and plentiful employment.  We could have lovely and affordable housing for everyone.  We could unleash our creativity to make this happen  in myriad ways.  Downtown Crossing has this vibrancy (although the window displays at Macy’s – alas – do not).  There are places to sit, people to watch, sponsored and impromptu music and performances. Ditto for Copley Library and the Bolling Building Atrium in Roxbury’s Dudley Square.

I hear that many of the corporate tech firms have more vibrant work environments  or at least space for staff to decompress, unwind, and connect informally which ultimately increases their productivity.

I could go on and on but I’ve lost the energy to say what I want to say. Writing about it releases it.  Being different in my personal space and showing that I value my family/friends/colleagues is my contribution.  And even I am not as loving or beautiful or open as I want to be and feel I should be.  I too often feel with myself and by myself.  I have to bite my tongue to keep from screaming sometimes:  is this all we want people?  Is this what we accept?  Why do we accept dirty, bland, dangerous and eroding public spaces?  Why don’t we demand more?