The brown sock had been missing for weeks, long past the point where it should have been consigned to the pile of mate-less socks pressed into new service as polishing mitts.  Yet it was a favorite whose color matched a pair of slacks, who fit up over my calves easily, whose elastic did not bind.  So I kept its mate in the sock drawer hoping to reunite the two. 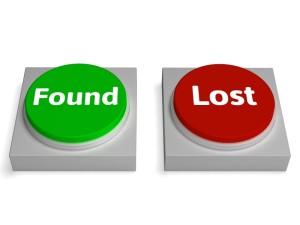 I found it last night, tucked in a crevice between the washer and dryer so firmly it looked part of the floor.  It was hiding in plain view, not clinging to the bottom of a seldom-used pillowcase or mistakenly sorted into my husband sock drawer.  I’m glad I found my sock.

Other things are not so easily found once lost, like optimism and friends.

I have lost friends over the years – a few of which I wrote about plaintively a few years back – hoping to find them by announcing that they were missing to my world.  All but one remain loss to me.  They’ve moved to new cities, they’re engage in new lives and our friendship/acquaintanceship just wasn’t important enough to them to sustain, I guess.  I guess because I do not know since our friendship did not have a dramatic end rather just ceased.

One of those friends I found…on Linked In.  I did a search, like I did at least once a year, and up she popped with a current photo.  She is as physically stunning as ever.  I wrote to her twice waiting what I hoped was a respectful distance between messages to connect.  She left Boston because of drama not of her doing but which was devastating to her and it seems like she cut off people she knew from that time in her life, including me. Me!  More than a decade has gone by, in fact two decades and still, she didn’t respond.

A  missing friend was found and is now gone again.  There is no re-purposing the lost friendship. Friendships are not socks…not even close.

Come-out, come-out Wherever you are

One thought on “Lost and Found, Found & Lost”